← Murdering Palestinians for their organs: “All facts on the ground prove Swedish report correct”
Gaza: The horror ignored by western hypocrisy →

Years after the US attacks on Iraq, people in the Persian Gulf state are suffering form the consequences of radioactive contamination caused by the use of depleted uranium.

Othman Hasan said the use of super-tough weapons by the US-led forces had a devastating impact on the nation and has become a serious environmental challenge since they have contaminated several parts of the country.

Armor-piercing shells made of depleted uranium were first used in warfare by US-led troops during the1991 Persian Gulf War and then during the 2003 invasion, turning many parts of Iraq to radioactive toxic wastelands.

Depleted uranium –a radioactive metal twice as dense as lead– has been blamed for a number of health problems, from cancer to birth defects. DU remains radioactive for about 4.5 billion years.

According to the Iraqi minister only a fraction of tanks and other wartime vehicles contaminated with depleted uranium — which are radiating nuclear energy– have been successfully treated and disposed of. 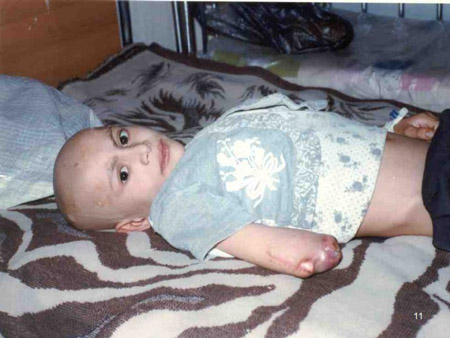 Following the 2003 US-led invasion, over 140,000 cases of cancer has been reported in Iraq, which are believed to be caused by toxic weaponry used by the occupying troops. It is reported that 2,000 tons of (DU) expenditure were used during the invasion of Iraq.

Several Human rights groups have called the US use of the toxic weapons against the people of Iraq as crimes against humanity since they are causing grievous harm and suffering to civilians in contaminated areas.

They have also accused the US-led troops of covering up and denying the damaging health effects of the DU’s and blamed them for refusing to release information on the amounts, types and locations of these weapons in Iraq.

Iraq’s Environment Minister also warned about the danger posed by the tens of millions of landmines strewn across the country.

“For one person we have one mine planted. We have 25 million mines in Iraq — one quarter of the world’s mines,” she said.

25 Comments on “Radioactive US weapons taking toll in Iraq”