In the midst of a crisis which has in recent weeks created a political chasm between Russia and the United States, there is an ongoing carnage in the name of combating terrorism against Yemen, Pakistan, Afghanistan and Somalia.

The story of the CIA-led killer drones which are killing women and children on a daily basis is a tale accorded inexcusably scant attention in media. Indeed it is being ignored.

Just recently, the US director of national intelligence James Clapper ordered US senators to remove a provision from a major intelligence bill that would require the president to publicize information about drone strikes and their victims.

The bill originally required the president to release a yearly report clarifying the total number of “combatants” and “noncombatant civilians” killed or injured by drone strikes in the previous year.

END_OF_DOCUMENT_TOKEN_TO_BE_REPLACED

Good and evil doesn’t have a grey zone.  Killing and stealing is bad.  Violence is never “good” or necessary unless it is used to defend against killers and thieves. Indeed, that is the morality behind the “just war” principle as defined by international laws and treaties.

Yet, this simple concept of right and wrong gets muddled by differing ideas about religion, patriotism, economics and many other divisions.  The “just war” rule has crumbled under the ambitions of empires throughout history.  The American-led Anglo Saxon empire is no different.

This empire has been brutally conquering and colonizing territory since the fall of Rome.  However, it has only gained an American face in the last century.  The United States quickly emerged as the world’s “superpower” primarily through its economic might.  For some time, many believed the U.S. to be a shining example of economic freedom for other nations to emulate.  Indeed, America was eager to promote “economic freedom” globally to open new markets for U.S.-based corporations.

END_OF_DOCUMENT_TOKEN_TO_BE_REPLACED

The Latest Orchestrated Threat and The End of History

Have you ever before heard of the Haqqanis? I didn’t think so. Like Al Qaeda, about which no one had ever heard prior to 9/11, the “Haqqani Network” has popped up in time of need to justify America’s next war–Pakistan.

President Obama’s claim that he had Al Qaeda leader Osama bin Laden exterminated deflated the threat from that long-serving bogyman. A terror organization that left its leader, unarmed and undefended, a sitting duck for assassination no longer seemed formidable. Time for a new, more threatening, bogyman, the pursuit of which will keep the “war on terror” going.

END_OF_DOCUMENT_TOKEN_TO_BE_REPLACED 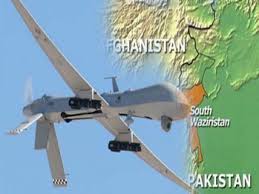 The use of unmanned drones by the U.S. to attack civilian population with Hellfire missiles is a form of state terrorism. It is designed not to assassinate individuals (extrajudicial killing), but to instil fear and terrorise the entire population.

We all know the U.S.-led war on Afghanistan is an illegal act of aggression, and there are no legal or legitimate grounds to justify the ongoing aggression. According to countless international law experts, the war on Afghanistan is an unlawful act of aggression. It “violates[s] international law and the express words of the United Nations Charter”. Article 51 only “gives a state the right to repel an attack that is ongoing or imminent as a temporary measure until the UN Security Council can take steps necessary for international peace and security”, he added. [1]. Indeed, all current U.S.-led wars on Muslim nations are acts of illegal aggression against sovereign nations. The use of armed drones, also known as pilotless planes or unmanned aerial vehicles (UAVs), to attack defenceless people and assassinate individuals is criminal.

END_OF_DOCUMENT_TOKEN_TO_BE_REPLACED

Globalist think-tanks are already building a case against Pakistan

Bangkok, Thailand May 3, 2011 – Foundation for the Defense of Democracy (FDD) scribe and all around intellectually dishonest propagandist, Bill Roggio of the “Long War Journal,” has dedicated his life to perpetuating the entirely fake “War on Terror,” abandoning all objectivity with the very name of his now officially government funded, Neo-Conservative establishment affiliated blog. The term “Long War” of course is a throwback to the Bush era and constant reassurances by the president that indeed the “War on Terror” will be endless.

END_OF_DOCUMENT_TOKEN_TO_BE_REPLACED

A total of 957 Pakistani civilians were killed in American drone attacks in the country 2010, the Human Rights Commission of Pakistan said in its annual report Thursday.

The report that focused on human rights violations in the country also laid an emphasis on terror attacks in 2010, according to Xinhua.

END_OF_DOCUMENT_TOKEN_TO_BE_REPLACED

Barack Obama is the most pro-war president in living memory

Barack Obama is fighting wars in Afghanistan, Iraq, Pakistan and Libya. He is spending more on the US military than any previous president.

If he serves for eight years as president, he will spend over $8 trillion on defence, including the hidden costs of the war economy.

Fifty per cent of all US tax dollars is spent on the US military. America spends more on defence than the combined total military budget of every other country in the world.

On September 25 three missiles fired from a U.S. Predator drone killed four people near the capital of North Waziristan in Pakistan’s Federally Administered Tribal Areas, marking at least the 16th such attack in the country so far this month.

This September has seen the largest amount of American unmanned aerial vehicle – drone – attacks in Pakistan and the most deaths resulting from them of any month in the nine-year war waged by the United States and its North Atlantic Treaty Organization allies in Afghanistan and, though insufficiently acknowledged, increasingly in Pakistan

END_OF_DOCUMENT_TOKEN_TO_BE_REPLACED

Captain Ferguson (not his real name) gets up early in the morning, and has breakfast with his wife and children. At the office, Captain Ferguson sits in front of the computer on and off for almost eight hours every day. At the end of the day he heads back home. Captain Ferguson’s wife is glad to see him back to discuss the events of her day. He does the same, with one omission. By most measures, it has been a beautiful day.

Beautiful, that is, if you don’t consider Captain Ferguson’s omission. While sitting in front of his computer, he was directing unmanned aerial vehicles (UAVs), also known as drones, carrying powerful bombs to land in distant countries. He presumes, but he is not totally sure, that he has hit the right target. After the bombs exploded four suspected terrorists were killed. Four fewer criminals the U.S. will have to deal with.

A later investigation will later reveal that they were not terrorists but rather they were parents and children on a birthday party. As a result of the attack, four adults and eight children were killed, and several more seriously injured.

END_OF_DOCUMENT_TOKEN_TO_BE_REPLACED

2010 is the last year of the new century and millennium and is the tenth consecutive year of the United States’ war in Afghanistan and in the 15-nation area of responsibility subsumed under Operation Enduring Freedom. In early March American military deaths in the Greater Afghan War theater – Afghanistan, Cuba (Guantanamo Bay), Djibouti, Eritrea, Jordan, Kenya, Kyrgyzstan, the Philippines, Seychelles, Sudan, Tajikistan, Turkey, Uzbekistan and Yemen – surpassed the 1,000 mark.

This year is also the tenth year of the first ground and the first Asian war fought by the North Atlantic Treaty Organization, which wages wars from and not to protect the nations of the northern Atlantic Ocean.

2010 is the tenth and deadliest year in Washington’s use of unmanned aerial vehicles (drones) for targeted assassinations and untargeted “collateral damage.”

Originally designed for battlefield surveillance and reconnaissance, albeit often to call in lethal military strikes, drones have been employed by the U.S. since 2001 to identify and kill human targets.

END_OF_DOCUMENT_TOKEN_TO_BE_REPLACED

One moment there was the hum of a motor in the sky above. The next, on a recent morning in Afghanistan’s Helmand province, a missile blasted a home, killing 13 people. Days later, the same increasingly familiar mechanical whine preceded a two-missile salvo that slammed into a compound in Degan village in the North Waziristan tribal area of Pakistan, killing three.

What were once unacknowledged, relatively infrequent targeted killings of suspected militants or terrorists in the George W Bush years have become commonplace under the Barack Obama administration. And since a devastating December 30 suicide attack by a Jordanian double agent on a Central Intelligence Agency forward operating base in Afghanistan, unmanned aerial drones have been hunting humans in the AfPak war zone at a record pace.

END_OF_DOCUMENT_TOKEN_TO_BE_REPLACED

US drones launched another attack against North Waziristan Agency today, killing six people in the tiny village of Deegan, west of Miramshah. All six people were locals, and officials said it was unclear which, if any, militant group they might be linked with.

The attack was the 11th drone strike into Pakistan (10 in North Waziristan and one just across the border in South Waziristan) in 2010. The attacks have killed scores of people.

At least 20 people have been killed in Pakistan in the latest US drone attacks that picked up pace after seven CIA agents were killed in late December.

The Sunday attack has reportedly targeted a militant compound in an area near Miranshah, the main town in the North Waziristan tribal region. However, the identity of those killed in the air raid has not been confirmed.

The number of CIA-operated drone strikes along the Pakistan-Afghanistan border has increased after a Jordanian double agent crossed into Afghanistan from the tribal lands and struck a US intelligence center in late 2009.

16 killed in US drone strikes in Afghanistan

Two separate US drone strikes have killed at least 16 people and injured several others in southern Afghanistan.

The US military command in Kabul announced on Tuesday that both attacks took place early on Monday in the southern province of Helmand.

US drone strike kills 4 in Pakistan

A US drone on Saturday fired missiles into Pakistan’s lawless tribal region, killing at least four people and wounding several others.

According to Pakistani officials, the attack targeted a compound some 40 Kilometers (25 miles) west of Miranshah, the main town in North Waziristan.

The death toll is expected to rise as some of the seriously injured were said to be in critical condition.

US drones kill 13 in Pakistan

The attacks were carried on the Sangzlai area in North Waziristan’s Tehsil Datta, reported the private satellite news channel Samaa.

North Waziristan has witnessed a growing number of US missile raids.

North Waziristan has witnessed a growing number of US missile raids. Drone attacks on Thursday and Friday left some seven people dead in the northwestern area.

The attacks, carried out by the US Central Intelligence Agency in cooperation with the Pentagon, reportedly killed more than 700 civilians in Pakistan in 2009.