Blair President of Europe? No, A War Crimes Trial 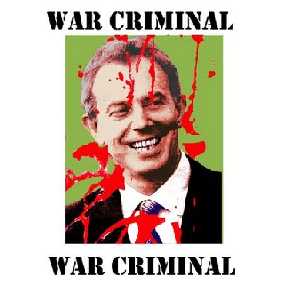 Noam Chomsky, Bruce Kent, Baroness Jenny Tonge, Naji Haraj , John Pilger, Haifa Zangana and 3,346 other citizens have today on Thursday 22 October 2009 asked the United Nations General Assembly to uphold the United Nations Charter, The Geneva and Hague Conventions, and The Rome Statute of International Criminal Court and to charge Anthony Charles Lynton Blair with War Crimes in connection with the Iraq War of 2003.

Peter Brierley, whose son was killed in Iraq, said on 9 October to Blair after the St Pauls service ” you have blood on your hands” ……….. and there is an awful lot of blood, and a catastrophic rise in birth deformities and cancers among the population of Iraq since 2003. As Lord Norman Tebbit said, Blair is ” like a vine bearing poisonous fruit, and I see these fruit everywhere”. If our Charters, which were fought for by so many, are not upheld today, they will not be worth the paper they are written on, and torture, rendition, hooding, cable ties, cluster bombs, depleted uranium, and smashed homes will be the order of the day.

RE ANTHONY CHARLES LYNTON BLAIR
We, the citizens of the United Kingdom and other countries listed, wish to uphold The United Nations Charter, The 1998 Rome Statute of The International Criminal Court, The Hague and Geneva Conventions and the Rule of International Law, especially in respect of:-

1: 1949 Geneva Convention IV: Article 146
The High Contracting Parties undertake to enact any legislation necessary to provide effective penal sanctions for persons committing, or ordering to be committed, any of the grave breaches of the present Convention.

2: 1907 Hague Convention IV: Article 3
A belligerent party which violates the provisions of the said regulations shall, if the case demands, be liable to pay compensation. It shall be responsible for all the acts committed by persons forming part of its armed forces.

We therefore call on you to indict Anthony Charles Lynton Blair in his capacity as recent Prime Minister of the UK, so long as he is able to answer for his actions and however long it takes, in respect of our sample complaints relating to the 2003 Iraq War waged by the UK as ally to the United States of America.

We are concerned that without justice and respect for the rule of law, the future for us and our progeny in a lawless world is bleak, as revealed by recent US declarations about the use of torture and the events of December 2008 in Gaza show.

The following are our sample complaints relating to the Iraq War 2003-2009:

1: Deceit and conspiracy for war, and providing false news to incite passions for war, causing in the order of one million deaths, 4 million refugees, countless maimings and traumas.

3: Causing the breakdown of civil administration, with consequent lawlessness, especially looting, kidnapping, and violence, and consequent breakdown of womens’ rights, of religious freedom, and child and adult education.

4: Failing to maintain the medical needs of the populace.

5: Despoliation of the cultural heritage of the country.

6: Supporting an ally that employs ‘waterboarding’ and other tortures.

7: Seizing the assets of Iraq.

10: Marking bodies of prisoners with numbers, writing, faeces and other degrading treatment.

11: The use of cluster bombs and other indiscriminate weapons including white phosphorous on “shake and bake” missions.

12: Supporting indiscriminate rocket attacks from F16 fighter planes on women and children in Fallujah in Nov 2004

13: Supporting the shooting up of ambulances and medical personnel in Fallujah in Nov 2004

14: Supporting the expulsion of the entire population of Fallujah save for young men of military age, for a reprisal attack on that city in Nov 2004.

US using White phosphorus in Afghanistan

Documentary – The Doctor, the Depleted Uranium, and the Dying Children (53 min.)

11 Comments on “Blair President of Europe? No, A War Crimes Trial”