A brief history of CIA involvement in the Drug Trade

According to Alfred W. McCoy in The Politics of Heroin in Southeast Asia, CIA arms, money, and disinformation enabled Corsican criminal syndicates in Marseille to wrestle control of labor unions from the Communist Party. The Corsicans gained political influence and control over the docks — ideal conditions for cementing a long-term partnership with mafia drug distributors, which turned Marseille into the postwar heroin capital of the Western world. Marseille’s first heroin laboratones were opened in 1951, only months after the Corsicans took over the waterfront.

END_OF_DOCUMENT_TOKEN_TO_BE_REPLACED

Just as the British Empire was in part financed by their control of the opium trade through the British East India Company, so too has the CIA been found time after time to be at the heart of the modern international drug trade. From its very inception, the CIA has been embroiled in the murky underworld of drug trafficking.

There are billions of dollars per year to be made in keeping the drug trade going, and it has long been established that Wall Street and the major American banks rely on drug money as a ready source of liquid capital. With those kinds of funds at stake, it is unsurprising to see a media-government-banking nexus develop around the status quo of a never-ending war on drugs – aided, abetted and facilitated by the modern-day British East India Company, the CIA.

This is our EyeOpener Report by James Corbett presenting the history, documented facts, and cases on the CIA’s involvement and operations in the underworld of drug trafficking, from the Corsican Mafia in the 1940s through the 1980s Contras to the recent Zambada Niebla Case today.

Official: US, NATO Now in Control of Narcotic Trade in Afghanistan 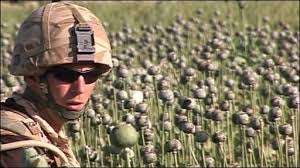 END_OF_DOCUMENT_TOKEN_TO_BE_REPLACED

A few hours after the terrorist attacks on the World Trade Centre and the Pentagon, the Bush administration concluded without supporting evidence, that “Osama bin Laden and his al-Qaeda organisation were prime suspects”. CIA Director George Tenet stated that bin Laden has the capacity to plan “multiple attacks with little or no warning.” Secretary of State Colin Powell called the attacks “an act of war” and President Bush confirmed in an evening televised address to the Nation that he would “make no distinction between the terrorists who committed these acts and those who harbor them”. Former CIA Director James Woolsey pointed his finger at “state sponsorship,” implying the complicity of one or more foreign governments. In the words of former National Security Adviser, Lawrence Eagleburger, “I think we will show when we get attacked like this, we are terrible in our strength and in our retribution.”

Meanwhile, parroting official statements, the Western media mantra has approved the launching of “punitive actions” directed against civilian targets in the Middle East. In the words of William Saffire writing in the New York Times: “When we reasonably determine our attackers’ bases and camps, we must pulverize them — minimizing but accepting the risk of collateral damage” — and act overtly or covertly to destabilize terror’s national hosts”.

The following text outlines the history of Osama Bin Laden and the links of the Islamic “Jihad” to the formulation of US foreign policy during the Cold War and its aftermath.

END_OF_DOCUMENT_TOKEN_TO_BE_REPLACED

The production of narcotics in Afghanistan has gone up 40-fold since the country’s occupation by the NATO forces. Precursor chemicals are imported to Afghanistan from Pakistan and other countries including some of the EU members. Massive injection of liquidity into poppy harvesting is in many cases disguised as the financing of agricultural activities, and Afghanistan hosts the full cycle of illicit drug production comprising opium poppy cultivation, conversion into heroin and opium at some 400 drug facilities, stockpiling, and wholesale supply to the Afghan and Pakistani drug markets.

END_OF_DOCUMENT_TOKEN_TO_BE_REPLACED

We really have to take our hats off to NATO. This clique of arms lobbyists and defender of jobs for the boys invaded Afghanistan in 2001 on the pretext that Osama bin Laden was using the country to attack western interests. Almost a decade after the Taleban declared war on drugs production, NATO’s Afghanistan is not only the world’s largest producer of opium but now, of hashish also.

END_OF_DOCUMENT_TOKEN_TO_BE_REPLACED

A senior Iranian anti-drug official has accused the US, Britain and Canada of playing a major role in Afghanistan’s lucrative drug trade.

On the sidelines of an anti-drug conference in Tehran, deputy head of Iran’s Drug Control Headquarters Taha Taheri said that Western powers are aiding the drug trade in Afghanistan.

“According to our indisputable information, the presence of the United States, Britain and Canada has not reduced the dug trade and the three countries have had major roles in the distribution of drugs,” IRIB quoted Taheri as saying on Thursday.

Iranian officials have always criticized Western countries over their policies towards Afghanistan, where poppy cultivation has drastically increased since the US-led military occupation of the country in 2001.

END_OF_DOCUMENT_TOKEN_TO_BE_REPLACED

EVER WONDER WHERE SOME OF THE BANK BAILOUT MONEY CAME FROM? According to the United Nations Office on Drugs and Crime, it came from the Afghan opium trade. Foreign Policy in Focus has a fascinating article analyzing the recent UNODC study on the drug trade, entitled “Addiction, Crime, and Insurgency: The Transnational Threat of Afghan Opium.”
While the original study headlines the role of the Taliban in the Afghan opium trade, the FPF article notes that buried deep in the study is the admission that the Taliban receives less than 15% of its funding from drugs and that it likely only benefits from 4% of the Afghan drug trade. Poppy farmers, for instance, take about 21% of the drug trade’s earnings. And the rest?

END_OF_DOCUMENT_TOKEN_TO_BE_REPLACED

The history of the terrorism conducted by the CIA, since the end of the World War II when countries in Asia and Latin America, were trying to make changes to improve their economical and political situation, the Unite States of North America realized that it was not good for their status as new super power; and began a new campaign, with only one rule, Anything Goes. This is the story of the terrorism of the CIA.

A History Of CIA Coups And Atrocities

Global Warfare USA: The World is the Pentagon’s Oyster

DOCUMENTARY – The War on Democracy by John Pilger (94 mins.)

Colour-Coded Revolutions and the Origins of World War III

The Militarization of Latin America

The Honduran coup: another US destabilization operation

DOCUMENTARY – “Paying the Price: Killing the Children of Iraq” by John Pilger (75 min.)

The CIA’s involvement in Iran Today: A Realistic Assessment

US Strategic Interests in Latin America: The Militarization of Colombia

When Turkey in the late 1940s became a site of NATO and US forces its rank became cemented as the number one supplier of opium to the heroin markets of the US and Europe. This illegal opium market was primarily centered in Europe, where the final processing into heroin was done before going on to the market for the rest of the world. Its profits were therefore also made largely by Europeans. In 1968 research ordered by the Nixon Administration revealed that this Turkish opium crop supplied 80% of the opium destined to become heroin for the illegal markets of Europe and the US .(1)

END_OF_DOCUMENT_TOKEN_TO_BE_REPLACED

The U.S. set the stage for the Afghan (and Pakistan) war eight years ago, when it handed out drug dealing franchises to warlords on Washington’s payroll. Now the Americans, acting as Boss of All Bosses, have drawn up hit lists of rival, “Taliban” drug lords. “It is a gangster occupation, in which U.S.-allied drug dealers are put in charge of the police and border patrol.”

END_OF_DOCUMENT_TOKEN_TO_BE_REPLACED

Obama Allies Want New Tax. Despite the fact that 36 per cent of income tax already goes to national defense

Not content with savaging American taxpayers with two huge new financial burdens during an economic recession, in the form of health care reform and cap and trade, close allies of Barack Obama have proposed a new war surtax that will force Americans to foot the bill for the cost of protecting opium fields in Afghanistan, paying off drug lords, and bribing the Taliban.

Warning that the cost of occupying Afghanistan is a threat to the Democrats’ plan to overhaul health care, lawmakers have announced their plan to make Americans pay an additional war tax that will be taken directly from their income, never mind the fact that around 36 per cent of federal taxes already go to paying for national defense.

“Regardless of whether one favors the war or not, if it is to be fought, it ought to be paid for,” the lawmakers, all prominent Democratic allies of Obama, said in a joint statement on the “Share The Sacrifice Act of 2010 (PDF),” reports AFP.

END_OF_DOCUMENT_TOKEN_TO_BE_REPLACED

Next time you see a junkie sprawled at the curb in the downtown of your nearest city, or read about someone who died of a heroin overdose, just imagine a big yellow sign posted next to him or her saying: “Your Federal Tax Dollars at Work.”

Kudos to the New York Times, and to reporters Dexter Filkins, Mark Mazzetti and James Risen, for their lead article today reporting that Ahmed Wali Karzai, brother of Afghanistan’s stunningly corrupt President Hamid Karzai, a leading drug lord in the world’s major opium-producing nation, has for eight years been on the CIA payroll.