The irony is that people not only know their rulers and society overall are two-faced, they expect it. Whether consciously or subconsciously we all know lying and deception are inherent to the matrix that’s been foisted upon us.

Another irony is that even in the definition of Janus there are two very different versions as to whom this mythological character really was.

We see this two-faced image a lot in our lives. Many know it dates back to Greek and Roman mythology. However, there’s much more to this character than meets the eye.

END_OF_DOCUMENT_TOKEN_TO_BE_REPLACED 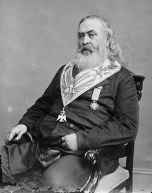 Albert Pike received a vision, which he described in a letter that he wrote to Mazzini, dated August 15, 1871. This letter graphically outlined plans for three world wars that were seen as necessary to bring about the One World Order, and we can marvel at how accurately it has predicted events that have already taken place.

END_OF_DOCUMENT_TOKEN_TO_BE_REPLACED

The Modern State of Israel: Providence, Miracle, or What Really Happened, Part 1

If you make people think they’re thinking, they’ll love you; but if you really make them think, they’ll hate you.”– Don Marquis

The following Glossary, abbreviations and essay will help the reader understand how Theodor Herzl on August 29, 1897 predicted that within fifty years there would be a Jewish state.

Zionism: an organization of Jews who believed the Jewish people needed a nation of their own to escape persecution.

Judaism: Jews collectively who practice a religion based on the Torah and the Talmud.

RothIsm or Rothschildism: abbreviation for The Zionist movement corrupted and co-opted by The House of Rothschild and their agents to advance a New World Order agenda. In 1871 Albert Pike Grand Master of the Luciferian group known as the Order of the Palladium, received a vision, which he described in a letter dated August 15, 1871 that graphically outlined plans for three world wars that were seen as necessary to bring about the One World Order.

END_OF_DOCUMENT_TOKEN_TO_BE_REPLACED

Pawns in the Game: A Satanic conspiracy to control the world

First printed in 1954, “Pawns in the Game” is the best single work available on the evil conspiracy that has been responsible for the devastating wars and continuing conflicts of the past century, and which is now close to its ultimate goal of total world domination through a dictatorial One World Government.

Pawns in the Game is written by William Guy Carr (1895-1959), a noted author who had a distinguished career as a Canadian naval officer, including outstanding service during World War II. The book begins as follows:

“Here is a TRUE story of international intrigue, romance, corruption, graft, and political assassinations, the like of which has never been written before. It is the story of how different groups or atheistic-materialistic men have played in an international chess tournament to decide which group would win ultimate control of the wealth, natural resources, and man-power of the entire world. It is explained how the game has reached the final stage. The lnternational Communists, and the International Capitalists, (both of whom have totalitarian ambitions) have temporarily joined hands to defeat Christian-democracy.

END_OF_DOCUMENT_TOKEN_TO_BE_REPLACED

The Occult Origins Of The American Nation

In spite of the ready availability of information found online as well as in libraries, like other neglected topics in so-called “history books”, the real origins of the United States are ignored and/or misrepresented.  One must have the skills (now rare, no longer taught in the schools) of critical thinking to research, find the facts and separate them from outright lies and misstatements.   Many books contain little more than untruths, repeated again and again.  The answer can be as complex and arcane as you want, but it’s pretty simple.  It’s all about the money!

“Many times, academic researchers will ‘adjust’ the information they find so that it can be published.  For quite often publishers will take only the data that fits the current beliefs and theories.  The reason being that only that which is ‘politically correct’ will be accepted and sell.  This often happens with history.  In reality, this has been going on since the first histories were written down.  History was made to fit into the accepted legends and myths rather than to objectively express what has occurred.  Then as time goes on, the talks became accepted and ‘adjusted’ to fit the current belief structure promoted by those in charge to fit the prevailing practices.”  Alexander S. Holub, The Gospel Truth, The Heresy of History, 2004.

Naturally, with the Internet Information Revolution, we are in a new era of publishing.  Hence, alternative ideas and theories are more available.  But in spite of that, many Americans don’t appreciate being told that the things they learned as school children – and later taught their children – were, at best, a bunch of highly embellished and thoroughly cleansed folktales.  Those who try to look at the facts and write about them are most often resented and ignored.  Needless to say, bestselling authors, publishers and columnists do not want to be seen in this light, hence the facts are suppressed.  In most cases, they are simply ignored and remain unmentioned.