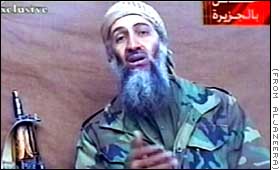 When Obama pronounced Osama Bin Laden dead in a televised announcement heard round the world last night, he was at least the ninth major head of state or high-ranking government official to have done so.
Given Bin Laden’s documented kidney problems and consequent need for dialysis, government officials, heads of state and counterterrorism experts have repeatedly opined that Osama Bin Laden has in fact been dead for some time. These assertions are based on Bin Laden’s failing health in late 2001 and visible signs of his deteriorating condition, as well as actual reports of his death from the same time frame.

In July of 2001, Osama Bin Laden was flown to the American Hospital in Dubai for kidney treatment. According to French intelligence sources, he was there met by the local CIA attache. When the agent bragged about his encounter to friends later, he was promptly recalled to Washington.

On the eve of September 11, Osama Bin Laden was staying in a Pakistani military hospital under the watchful eye of Pakistan’s ISI, the Pakistani equivalent of the CIA with deep ties to the American intelligence community.

In October 2001, Bin Laden appeared in a videotape wearing army fatigues and Islamic headdress, looking visibly pale and gaunt. In December of 2001, another videotape was released, this time showing a seriously ill Bin Laden who was seemingly unable to move his left arm.
Then on December 26, 2001, Fox News reported on a Pakistan Observer story that the Afghan Taliban had officially pronounced Osama Bin Laden dead earlier that month. According to the report, he was buried less than 24 hours later in an unmarked grave in accordance with Wahabbist Sunni practices.
What followed was a string of pronouncements from officials affirming what was already obvious: supposedly living in caves and bunkers in the mountainous pass between Afghanistan and Pakistan, Osama would have been deprived of the dialysis equipment that he required to live.
On January 18, 2002, Pakistani President Pervez Musharraf announced quite bluntly: “I think now, frankly, he is dead.”
On July 17, 2002, the then-head of counterterrorism at the FBI, Dale Watson, told a conference of law enforcement officials that “I  personally think he [Bin Laden] is probably not with us anymore,” before carefully adding that “I have no evidence to support that.”
In October 2002, Afghan President Hamid Karzai told CNN that “I would come to believe that [Bin Laden] probably is dead.”
In November 2005, Senator Harry Reid revealed that he was told Osama may have died in the Pakistani earthquake of October that year.
In September 2006, French intelligence leaked a report suggesting Osama had died in Pakistan.
On November 2, 2007, former Pakistani Prime Minister Benazir Bhutto told Al-Jazeera’s David Frost that Omar Sheikh had killed Osama Bin Laden.
In March 2009, former US foreign intelligence officer and professor of international relations at Boston University Angelo Codevilla stated: “All the evidence suggests Elvis Presley is more alive today than Osama Bin Laden.”
In May 2009, Pakistani President Asif Ali Zardari confirmed that his “counterparts in the American intelligence agencies” hadn’t heard anything from Bin Laden in seven years and confirmed “I don’t think he’s alive.”
Now in 2011, President Obama has added himself to the mix of people in positions of authority who have pronounced Osama Bin Laden dead. Some might charge that none of the previous reports had any credibility, but as it is now emerging that Osama’s body was buried at sea less than 12 hours after his death with no opportunity for any independent corroboration of his identity, the same question of credibility has to be leveled at this latest charge. To this point, the only evidence we have been provided that Osama Bin Laden was killed yesterday are some images on tv of a burning compound and the word of the man currently occupying the oval office.
But given that an informed consensus has formed around the opinion that Bin Laden died long ago due to kidney failure, will the people of America hold their President to the highest standard in presenting evidence that the person killed was actually Osama Bin Laden, and that he actually died in the way described, or will this pronouncement go unquestioned like so many other deaths in the never ending war of terror?

Stay tuned for more on this story as it develops…

James Corbett is an independent journalist who has been living and working in Japan since 2004. He has been writing and producing The Corbett Report, an online multi-media news and information source, since 2007. His forthcoming book, Reportage: Essays on the New World Order, will be available for purchase in early 2011.

For more information about Corbett and his background, please listen to Episode 163 of The Corbett Report podcast, Meet James Corbett

Has Osama Bin Laden been dead for seven years – and are the U.S. and Britain covering it up to continue war on terror?

The Terror Card: Fear is the Key to Obedience

How the U.S. Invented ‘al Qaeda’! (With Videos)

War on Terror is a Fraud