← Mega Corruption Scandal At The WHO
Interview – Professor Antony Sutton: Wall Street & the rise of Hitler →

Not Satire: Obama to Invoke Aghanistan in His Nobel Speech

The president plans to speak about war during his Nobel Peace Prize acceptance speech in Oslo on Thursday. Perfect. 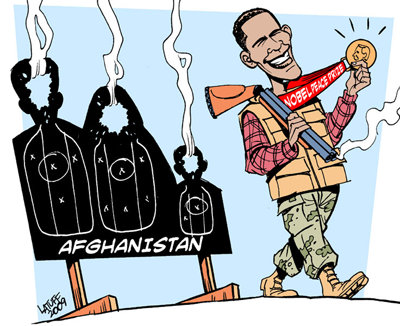 On the October morning Barack Obama was awarded the Nobel Peace Prize, I informed a friend who hadn’t yet heard the news that our greenhorn president was now a Nobel laureate. “I hope it’s not for literature,” he replied.

The Nobel Prize for Literature would have been a stretch, but in just as many ways — or more — so is the Nobel Peace Prize. And the only way I’ve been able to rationalize the honor, two months later, is by swallowing the committee’s explanation that it wasn’t so much commending Obama for peace-making accomplishments as it was trying to encourage him to live up to the prize’s tenets, by being a more considerate, less bellicose friend to the international community than his predecessor.

Obama was clearly as uncomfortable as the rest of us with the premature honor and so I’ve often wondered what he would say during his acceptance speech in Oslo. I’d assumed he would probably return to the rhetorical hope-and-change flourishes that bolstered his presidential campaign, because that’s safe territory he’s honed and owned in the past.

But as it turns out, reality is much more wondrous than my imagination. Timing matters, too, and tomorrow’s speech comes just one week after announcing the escalation of war in Afghanistan. As a result, official word is that in his address, Obama plans to frame the war in Afghanistan as part of his wider plan for peace.

I am not kidding.

Orwell could not have written it better himself. “Thank you for this award. I accept it in the name of war — WAR IS PEACE.” Hell, even Bush could string that one together.

Obama is going to stand before the men and women who gave him this award in hopes of making the escalation of Vietghanistan a political impossibility, and extol the peace-making virtues of warfare.

In October, I found Obama’s Nobel honor to be be precipitous and undeserved. But today, it seems more offensive than anything else for him to accept a peace prize by invoking a foreign policy framed as “escalation for withdrawal.” That sounds a lot like burning the village to save it to me.

And I have no doubt his war apologia will be framed by the misuse of “hope” and “change.” He’s real good at that.

Obama and the Nobel Prize: When War becomes Peace, When the Lie becomes the Truth

War Criminal Obama Deserves An Oscar, But Not A Nobel Peace Prize

3 Comments on “Not Satire: Obama to Invoke Aghanistan in His Nobel Speech”