← The Face of Dictatorship: EU Preparing for Armed Gendarmerie Against Treaty-disobedient Populations
Irish No will not stop Europe advancing, says France →

US war on Pakistan 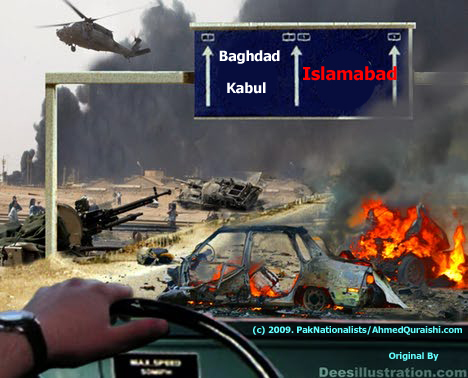 THE US design to destabilize Pakistan is becoming clearer by the day, even for the most blinkered Pakistani. As the US continues to be stalemated in Afghanistan, it has sought to move the centre of gravity of the “war on terror” to Pakistan. Initially it was assumed that this shift would be restricted to FATA, but now it is evident that the US is seeking to engulf the whole of Pakistan in an asymmetric conflict, which will eventually pit the people against the state, especially the military. Reports of a US plan to target Balochistan, including its capital city Quetta are, in all likelihood, correct – more so because the US has not issued even a half-hearted denial on this count. Pakistani officials are admitting that the US has sought to extend drone attacks to Balochistan, especially Quetta. Given the present government’s proclivity to accede to all US demands, it should not come as a surprise to soon see these drone attacks taking place.

However, for Pakistan such a development will be suicidal, given the prevailing instability in Balochistan and the continuing lack of trust between the Baloch people and the federation. Worse still, Quetta is an urban centre with a concentration of population. It is also a major military station with the Command and Staff College as well as other formations present in the heart of the city. How far is our military prepared to accommodate the US desire to undermine the country’s sovereignty? After all, the drones will push the separatists closer to their goal, while the US will think it can move towards its concept of Greater Balochistan through the break up of Pakistan and Iran. Unfortunately for the US, the Iranian leadership shows no signs of falling prey to such US designs, unlike their Pakistani counterparts.

Afghanistan and the New Great Game

Documentary – The Oil Factor: Behind the War on Terror

VIDEO – The men behind Obama… (Interview with Webster Tarpley)

VIDEO – Timeline: Afghanistan: John Rees on the history of imperial intervention and resistance

The U.S. Invades and Occupies Pakistan

US expands war into Pakistan (Missile strikes to be intensified)

US Missile Defense System: Most Expensive Fraud of the Century

Russia insists on halt to US missile shield

9 Comments on “US war on Pakistan”