The Militarization of Latin America

Seven US military bases in Colombia 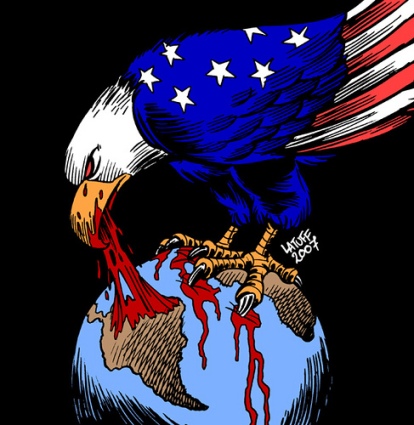 The UNASUR summit in Bariloche, Argentina will have to face two grave problems weighing heavily on Latin America: the military coup in Honduras and the militarization of the region as a result of the installation of not one but seven U.S. military bases in Colombia.

In regards to the first problem, UNASUR ought to demand consistency from Barack Obama with respect to his statements in support of a new era of inter-American relations. As has been emphasized on numerous occasions, the coup is a test balloon to check the reactions of the peoples and governments of the region. And that it happened in Honduras is precisely because that is the country most intensely subjected to the ideological influence and political dominance of Washington.

With OAS negotiations having failed, Washington has proceeded to suspend the issuance of visas to Honduran citizens, a very lukewarm measure but an indicator of the fact that it is taking note of the prevailing political atmosphere in the region. But Obama ought to do much more, and abandon the fallacious argument he expressed a several days ago when he referred to the contradiction that critics of imperialism enter into when they demand that the U.S. intervene in Honduras. It is “ironic,” Obama said on that occasion, “that the people that were complaining about the U.S. interfering in Latin America are now complaining that we are not interfering enough”.

We know that Obama is not very well informed about what his military and civilian subordinates do, not to mention his intelligence services. But he ought know, because it is so basic, that the U.S. has been intervening in Honduras since 1903, the year in which for the first time U.S. Marines landed in that country to protect North American interests in a moment of political crisis. In 1907, on the occasion of war between Honduras and Nicaragua, U.S. troops were stationed for three months in the cities of Trujillo, Ceiba, Puerto Cortes, San Pedro Sula, Laguna, and Choloma. In 1911 and 1912 they repeated the invasions, in the later case to prevent the expropriation of a railroad in Puerto Cortes. In 1919, 1924, and 1925 imperialist expeditionary forces again invaded Honduras, always with the same pretext – protect the lives and property of North American citizens residing in the country. But the largest invasion occurred in 1983 when, under the direction of a sinister figure, Ambassador John Negroponte, the huge base of operations was established from which the U.S. launched its reactionary offensive against the Sandinista government and the Salvadoran Farabundo Marti guerrilla movement. Obama can not ignore this nefarious history and ought to know that the coup against Zelaya was only possible due to the acquiescence of his government. What is being asked is that the U.S. stop its intervention, that it withdraw its support for the coup government, the only thing keeping it in power, and thereby facilitate the return of Zelaya to Tegucigalpa. The White House has at its disposal many economic and financial tools with which to discipline its ally. If it does not do so it because it does not want to, and the governments and peoples of Latin America will reach their own conclusions.

In relation to the second problem, the U.S. bases in Colombia, the following must be said. First of all, the U.S. empire does not maintain 872 bases and military missions spread across the length and width of the planet so that its troops can experience the delights of multiculturalism or breathe fresh air of life. It maintains them, at enormous cost, Noam Chomsky has said on numerous opportunities, because they are the principal instrument in a plan of global domination comparable only to that which obsessed Adolf Hitler in the 1930s. To think that those troops and weapons systems are based in Latin America for some reason other than to insure the territorial and political control of a region that experts consider the richest on the planet in terms of its natural resources – water, energy, biodiversity, minerals, agriculture, etcetera – would be unforgivably stupid. These bases are the front-line of a military aggression that may or may not occur today or tomorrow, but will certainly occur when the imperialists consider it convenient. For this reason, UNASUR ought to forcefully reject their presence and demand the suspension of the installation of these bases. And furthermore, it should make clear that this is not an “internal matter” of Colombia – no one in their right mind can invoke rights of national sovereignty to justify the installation in their territory of troops and military equipment which can only bring destruction and death to its neighbors. During the 1930’s, as Hitler rearmed Germany, the U.S. and its allies screamed to the high heavens, knowing that the next step would be war, and they were right. Why should it be any different now.

Secondly, as long as Uribe is president of Colombia there will be no solution to this problem. He knows, as does the entire world, that the U.S. has been putting together a growing dossier in which he is classified as a narcotrafficker and accomplice to the crimes of the Colombian paramilitaries. In 2004, the National Security Archives released a 1991 document in which the U.S. accused the then-Senator Alvaro Uribe Velez of being one of Colombia’s principle narcotraffickers, ranking him number 82, just behind Pablo Escobar Gaviria, the head of the Medellin cartel, who ranked number 79. The report, which can be read at http://www.gwu.edu/%7Ensarchiv/NSAEBB/NSAEBB131/dia910923.pdf , makes clear that the now president of Colombia “was dedicated to collaboration with the Medellin cartel at high government levels. Uribe was connected with a business involved in narcotics activities in the U.S. His father was murdered in Colombia for his connection to narcotics traffickers. Uribe has worked for the Medellin cartel and is a close personal friend of Pablo Escobar Gaviria … (and) was one of the politicians who, from the Senate, has attacked all forms of the extradition treaty.” As a result, Uribe has no margin of freedom to oppose any request coming from Washington. His role is to be the empire’s Trojan Horse and he knows that if he opposes that ignominious duty his fate will be no different than that of another Latin American figure, also a president, Manuel Antonio Noriega, who having completed the mission that the White House had set out for him was arrested in 1989 after a devastating U.S. invasion of Panama and was condemned to 40 years in prison for his connection with the Medellin cartel. When Noriega ceased to be useful to the interests of the imperialists, he quickly went from being president to a prisoner in a maximum security cell in the United States. This is the mirror into which Uribe looks day and night, and explains his permanent irritation, his lies, and his desperation to be re-elected as president of Colombia, while at the same time converting that nation into a U.S. protectorate and himself into a sort of proconsul-for-life of the empire, at the ready to caste a shadow over an entire continent so as to avoid the same fate as his Panamanian counterpart.

Atilio Boron is professor of political theory at the University of Buenos Aires. He is the recipient of the 2009 UNESCO International Jose Marti Award for outstanding contribution to the unity and the integration of Latin America and the Caribbean and to the preservation of their identities, cultural traditions and historical values.

US Plan for Colombia Deployment Raises Ire Across Latin America

DOCUMENTARY – The War on Democracy by John Pilger (94 mins.)

US Strategic Interests in Latin America: The Militarization of Colombia

16 Comments on “The Militarization of Latin America”