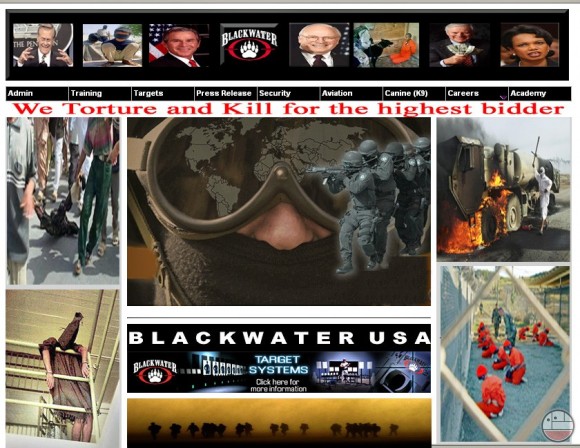 Blackwater, the private mercenary company owned by Erik Prince, has been thrust back into the spotlight by a series of stunning revelations about its role in covert US programs. Since at least 2002, Blackwater has worked for the CIA in Afghanistan and Pakistan on “black” contracts. On August 19, the New York Times revealed that the company was, in fact, a central part of a secret CIA assassination program that Dick Cheney allegedly ordered concealed from Congress. The paper then reported that Blackwater remains a key player in the widening air war in Pakistan and Afghanistan, where it arms drone aircraft. These disclosures follow allegations–made under oath by former Blackwater employees–that Prince murdered or facilitated the murder of potential government informants and that he “views himself as a Christian crusader tasked with eliminating Muslims and the Islamic faith from the globe.”

In addition, Blackwater is being investigated by the Justice Department for possible crimes ranging from weapons smuggling to manslaughter and by the IRS for possible tax evasion. It is being sued in federal courts by scores of Iraqi civilians for alleged war crimes and extrajudicial killings. Two of its men have pleaded guilty to weapons-smuggling charges; another pleaded guilty to the unprovoked manslaughter of an Iraqi civilian, and five others have been indicted on similar counts. The US military is investigating Blackwater’s killing of civilians in Afghanistan in May, and reports are emerging that the company may be implicated in the CIA’s extraordinary rendition program.

And yet, despite these black marks, the Obama administration continues to keep Blackwater on the government’s payroll. In Afghanistan and Pakistan, Blackwater still works for the CIA, the State Department and the Defense Department to the tune of hundreds of millions of dollars, and its continuing presence is an indicator of just how entrenched private corporations are in the US war machinery. The United States now deploys more private forces (74,000) than uniformed soldiers (57,000) in Afghanistan. While the majority of these contractors are not armed, a sizable number carry weapons, and their ranks are swelling. A recent Defense Department census reports that as of June 30, armed DoD contractors in Afghanistan had increased by 20 percent from the first quarter of 2009.

With the exception of a few legislators, notably Representatives Henry Waxman and Jan Schakowsky, Congress has left the use of private military contractors largely unmonitored. But the recent disclosures of Blackwater’s covert activities may finally force Congress to take action. At the very least, the Obama administration should be required to disclose current and past federal contracts with all of Prince’s companies and affiliates, including those registered offshore.

Congress can take Schakowsky’s lead and ask the Obama administration why it is continuing to work with Blackwater. Schakowsky has called on Secretary of State Hillary Clinton and Defense Secretary Robert Gates to review all of the company’s existing contracts and not to award any new ones to its many affiliates. Congressional intelligence committees should also conduct a wide-ranging investigation into Blackwater’s involvement in the CIA assassination program. Were Blackwater operatives involved in actual killings? Who approved the company’s involvement? Was Congress notified? How high up the chain of command did the covert relationship with the company go? Was Blackwater active on US soil? What role, if any, did/does Blackwater play in secretly transporting prisoners?

This investigation must include the sworn testimony of former top CIA officials who were later hired or paid by Blackwater. Among these are Alvin “Buzzy” Krongard, the former number-three man at the agency, who gave Blackwater its first CIA contract and then served on the company’s board, and J. Cofer Black, the former head of the CIA’s counterterrorism unit, which ran the assassination program. Black later became the vice chair of Blackwater and ran Total Intelligence Solutions, Prince’s private CIA. Total Intelligence has been simultaneously employed by the US government, foreign governments and private companies, an arrangement that may have created conflicts of interest that the House and Senate intelligence committees are obliged to investigate. Congress should also ask if national security is compromised when the knowledge, contacts and access possessed by former high-ranking CIA officials like Black and Krongard are placed on the open market.

John Kerry, chair of the Senate Foreign Relations Committee, has questioned whether Blackwater used its State Department clearance as cover to gather information for targeted killings. Kerry should hold hearings in which Hillary Clinton and Condoleezza Rice would be compelled to testify on the matter. The oversight committees should probe allegations that Blackwater was involved in arms smuggling and extrajudicial killings in Iraq, while committees dealing with military affairs should investigate what impact Blackwater’s actions in Iraq have had on the safety of US troops. An invaluable asset for these investigations could be the Commission on Wartime Contracting, established by Senators Jim Webb and Claire McCaskill. Finally, the Justice Department should probe the murder, smuggling and other allegations against Prince and his executives.

In all of this, Blackwater has proved itself to be a whack-a-mole: it keeps popping up. Despite the Iraqi government’s ban on the company, its operatives remain in Iraq a full two years after the September 2007 Nisour Square massacre, in which seventeen Iraqi civilians were gunned down in Baghdad. This resilience means that the investigations into the company must be comprehensive and coordinated.

Lastly, it is a mistake to think that Blackwater is the only problem. In Iraq, for example, the Obama administration is replacing Blackwater with the private contractor Triple Canopy, which, in addition to hiring some of Blackwater’s men, has its own questionable history, including allegations of shooting civilians and hiring forces from countries with a history of human rights abuses. Blackwater is but one fruit on the poisonous tree of military outsourcing. It is imperative that Congress confront the intimate linking of corporate profits to US wars and lethal, covert operations.

Obama Has 250,000 “Contractors” in Iraq and Afghan Wars, Increases Number of Mercenaries