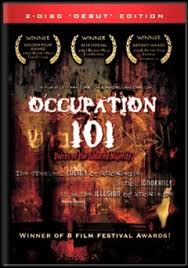 Occupation 101: Voice of the Silenced Majority is a 2006 documentary film on the Israeli-Palestinian conflict directed by Sufyan Omeish and Abdallah Omeish, and narrated by Alison Weir, founder of If Americans Knew.

The film focuses on the effects of the Israeli occupation of the West Bank and Gaza Strip, and discusses events from the rise of Zionism to the Second Intifada and Israel’s unilateral disengagement plan, presenting its perspective through dozens of interviews, questioning the nature of Israeli-American relations — in particular, the Israeli military occupation of the West Bank and Gaza, and the ethics of US monetary involvement.[1]

Occupation 101 includes interviews with mostly American and Israeli scholars, religious leaders, humanitarian workers, and NGO representatives — more than half of whom are Jewish — who are critical of the injustices and human rights abuses stemming from Israeli policy in the West Bank, East Jerusalem, and Gaza. – Wikipedia